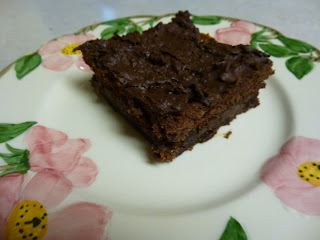 Today I'm linking up with Sharon Fleming's Around the Table blog and she is sharing a great Valentine's Day recipe just in time for February 14th! To read the directions, head on over to Mrs.Fleming's Blog!! Make sure to take a look around at all the great recipes, advice for meal times, and some great giveaways too! To learn more about Mrs. Fleming and her ministry, click here. Enjoy!

And since it's Valentine's Day, wouldn't it be cute to make a card like this one to accompany your turtle cake! 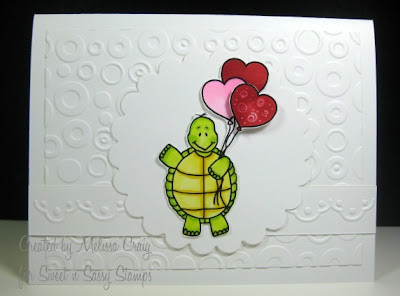 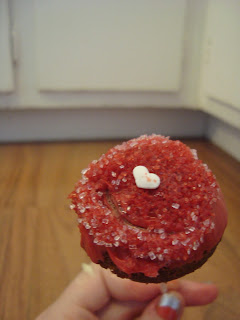 Today I'm linking up with a fabulous blog called Around the Table. This blog has articles about improving family meal times, conversation starters, and great recipes too!  (If you'd like to see a previous post with my interview on "Around the Table" click here.)
Happy Valentine's Day! I've always loved this holiday, mostly because I usually get a lot of candy and chocolate, especially from my Grandma, and I can wear all the pink I want! Well, back to baking...these cake pops are very simple to make and they're a lot of fun to decorate for Valentine's Day! This is one of those recipes where all you need is a little faith and pixie dust...NOT! But you may want some sprinkles, or if you must have some pixie dust, make sure to use edible glitter dust! 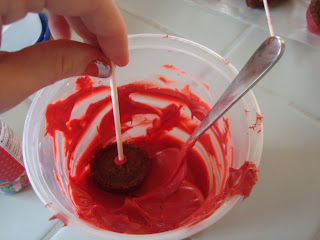 Ingredients:
-1 Betty Crocker cake mix (and ingredients called for on the box)
-1 container of vanilla frosting (or your favorite flavor!)
-1 package of red candy melts (these are typically found at a craft store such as Micheal's)
-sprinkles! (red,white, pink, etc.)
-lollipop sticks
-foam block for drying and displaying cake pops
Directions:
1) Bake cake according to package directions. Let cool.
2) Once cake is cooled, crumble cake into a fine mixture using your hands.
3) Pour crumbled cake into a large bowl and mix in 3/4 of a container of vanilla frosting.
4) Mix with a spoon or your hands until thoroughly combined.
5) Melt candy melts according to package directions. Dip lollipop
sticks in melted candy melts just slightly and push inside the cake
ball. This helps secure the stick in the cake ball. Place in the
fridge for about 15 minutes to harden.
6) Dip and coat hardened cake balls in candy melts and tap stick
against the side of the bowl to shake off the excess. If desired, dip
cake pop into sprinkles until covered.
7) Stick into the foam block to dry. Enjoy!

P.S. Another way to do this, is to buy a cake pop pan!
Here is a link to another cake pop recipe!

Could it get any easier? This is a canned crescent roll, wrapped around an apple slice, then baked for 9 minutes. Nope, can't get much easier than that.

2. Wash and cut the apple into 8 pieces. Take out the Pillsbury rolls and separate into 8 triangles. Brush a thin layer of butter and sprinkle the cinnamon sugar onto both sides of the triangle, place on pan and roll up the apple.

3. Bake for approximately 9 minutes, or until golden brown. If desired garnish with whipped cream and caramel sauce.

*To make the dessert even sweeter, brush the apple with the butter and cinnamon sugar.

Pretty easy right? There are lots of different versions for this recipe. I honestly thought that I was making an original. But alas, when I searched the internet for "cinnamon crescent apples," they were already made....sigh...oh well. 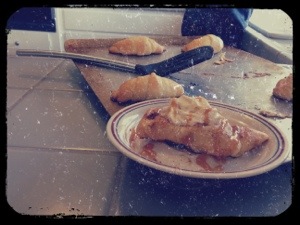 P.S. I'm experimenting with making this a Wordpress Blog!!! I'm hoping it will be ready by the blog's first anniversary (March 2nd). =D 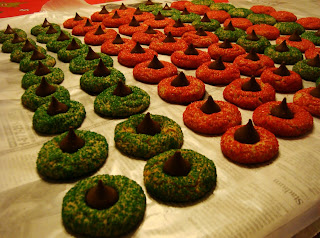 
I just popped in to say MERRY CHRISTMAS!
not any of this Happy Holiday stuff...just good ole Merry Christmas and Happy New Year!

Have you thought about making a New Year's resolution yet?


This past year I made a resolution (along with my brother) to not drink any soda OR carbonated water for a whole year. Yes, that meant no sparkling cider on Thanksgiving either.  I'm proud to say that I've stuck with it and I only have a few more days to go!

But while I'm waiting, I made a very festive batch of peanut butter blossoms that I wanted to share with you.

Gracey
I'm 14 and I love to bake. I come from a long line of bakers. My CA Grandma was a Home Ec major from UC Berkeley and subscribed to Bon Appetit, while my PA Grandma subscribes to Taste of Home and is the queen of shoo fly pies. I describe my mother as a Betty Crocker type of baker. And I'm a combination of all three. Oh... did I mention I was born in the Philippines?